By using Docker we can create containers for different purposes, which in our case will be one for Node.js, as well as a separate container for the database.

The purpose of this demonstration is to show how one can run separate applications in their own containers, and allow these containers to interact with eachother (one-way interaction in this case) In addition, the finished product implements SoundClouds and YouTubes APIs to extract data.

Since the application and database were launched in a scenario on a virtual machine hosted by Katacoda, we've also chosen to host the database and application on a server, using Docker of course. Go to http://13.79.227.207:1337/ to access the application at any time.

The project is naturally open source, so if you're interested in seeing the source code for the project you can find that here

Your environment is currently being packaged as a Docker container and the download will begin shortly. To run the image locally, once Docker has been installed, use the commands

In this step, we'll launch a MySQL database in a container in which the data will be stored. We'll begin with the database since the application is dependent on the database for storage.

With Docker, all containers are based on a Docker image. The first step will be to find the image for MySQL. There are a lot of options on Docker Hub, but we'll stick with the official repository, which can be found here.

To pull the image to your host, run docker pull mysql.

An image can be run by using the command docker run <options> <image-name>. For example, we can run the mysql image in the background by running docker run -d mysql. By default, a container in Docker is launched in the foreground. The option -d makes sure that the process runs in the background.

In addition, we set the root password to "tbl06pw", and create and use a database called "tbl06". The option -p exposes the port 3306, which lets the application interact with the database (port 3306 is default for MySQL) Finally, the option -d runs the process in the background.

Step 2 - Launching a Sails.js (node.js) application in a container

The first task we have to do is to find the Docker image that we (group 1) created in beforehand, which has been configured to run the Node.js application.

This image contains everything you will need to start the process, which means you won't have to configure the host or install dependencies. To find the image for this step, we'll run the command docker search mortea15/tbl06

By using the search command one can find several images. As we can see in the terminal, we got a couple of results from the search. The image we're looking for is called tbl06. This image will be used to run Node.js in a container.

To complete this step, launch a container in the background which runs an instance of tbl06 based on the image.

This runs the Sailsjs application in the background, gives it a friendly name, and exposes it to be reachable by port 1337.

Because this is the first time you use the tbl06-image, it will be downloaded (pulled) to the Docker host before it's launched. Instead of issuing the commands docker pull image and docker run image, we can run docker run image which will download the image automatically. The image for tbl06 is rather large, so it might take a moment to pull.

After the pull is completed and the image is launched in a container, we can check its status by running the command docker ps

Wrapping up - Accessing the application 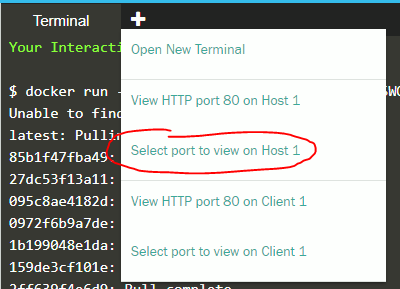 Make sure that at least one of your groups members go to the "Register" section in the menu and register name and which group you're in (preferrably group #). The data registered in this form is stored in the database in the separate container.

The application makes API calls using YouTubes and SoundClouds API to query for songs matching the given input, and previews of lyrics are retrieved from MusixMatch with their API.

Katacoda offerings an Interactive Learning Environment for Developers. This course uses a command line and a pre-configured sandboxed environment for you to use. Below are useful commands when working with the environment.

In the case of certain exercises you will be required to edit files or text. The best approach is with Vim. Vim has two different modes, one for entering commands (Command Mode) and the other for entering text (Insert Mode). You need to switch between these two modes based on what you want to do. The basic commands are:

The best way to learn its by doing. All our tutorials are interactive with pre-configured live environments ready for you to use.

The best way to learn its by doing. All our tutorials are interactive with pre-configured live environments ready for you to use.

Have some feedback for us? Please tell us what's happening so we can improve Katacoda.